With Bonefish and Tarpon Trust

Located on the edge of America (think: closer to Cuba than Miami), Key West is home to pastel-hued houses, wild roosters, and Ernest Hemingway’s six-toed cats. But it’s also a revered saltwater fishing destination, thanks to the elusive game fish that live in Florida’s shallow-water flats. We spent three days on the water with Bonefish and Tarpon Trust, who are working to conserve and restore declining fish populations — specifically bonefish, tarpon, and permit — in the Keys. Shannon Moorhead is practicing her fly cast on a school of false albacore when the call comes through. Another boat caught a tarpon, the coastal game fish that Shannon and her peers, Luke Griffin and Robbie Roemer, have been contracted by Bonefish & Tarpon Trust to tag. The three PhD candidates traveled to Key West for Trippe’s Invitational Tarpon Series, an elite fishing tournament with a conservation bent — since tarpon have a low stress tolerance, anglers can fight the enormous, muscular fish for a maximum of 20 minutes. Fish have to be handled in the water and cannot be pulled onto the boat for a photo op. Each measure is made to avoid exhausting the fish, which increases the likelihood it will fall prey to sharks. 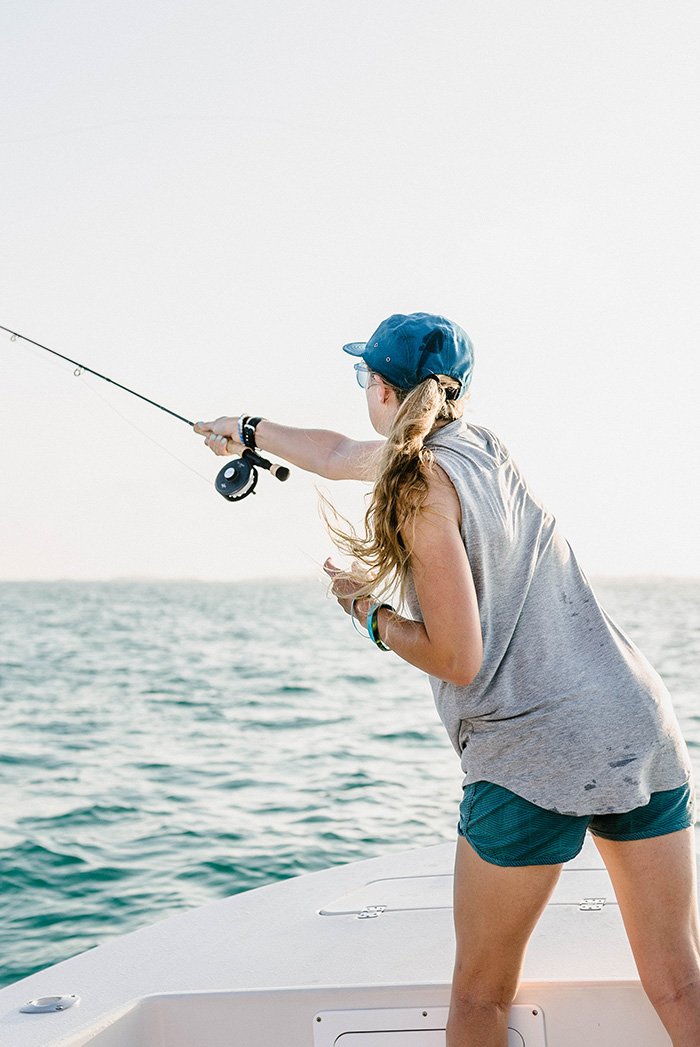 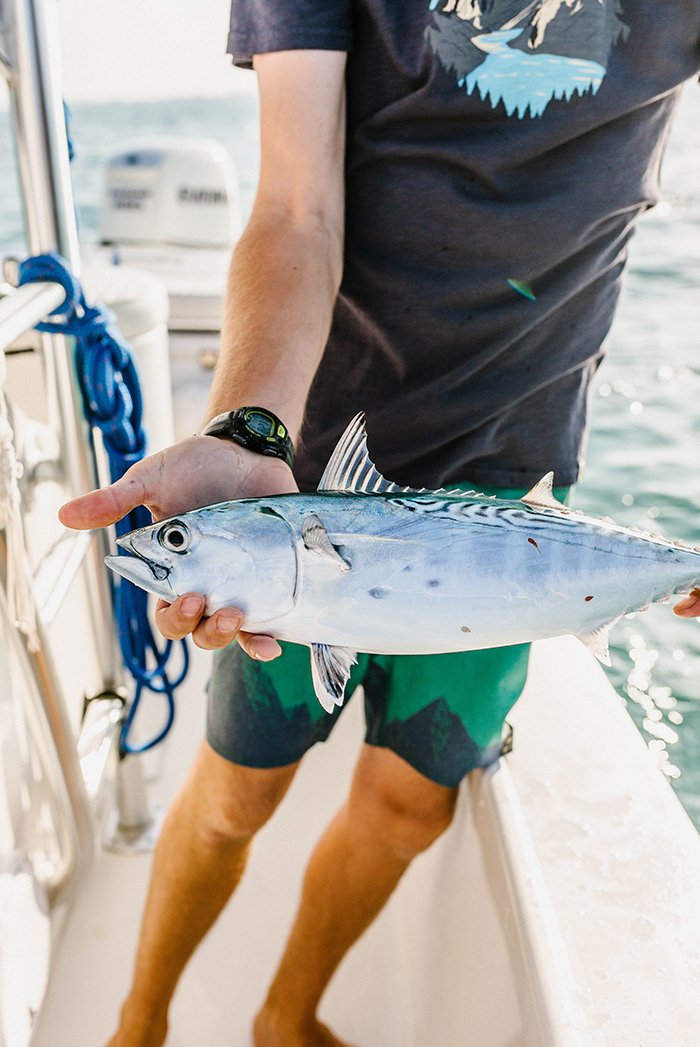 The three-day tournament is designed for people who know their way around a fly rod and have a deep respect for the fish they’re chasing, despite the colorful names anglers tend to call tarpon while waiting for a bite on the line. Instead of towing fish into weigh stations, competitors are urged to contact Bonefish & Tarpon Trust (BTT) so they can tag tarpon and permit (another game fish) with an acoustic tracker that allows the trust to study their migrations. But the call we receive is unusual, even for this competition: The team needs to revive a tarpon, which is too tired from his fight with the fisherman to be released on its own. 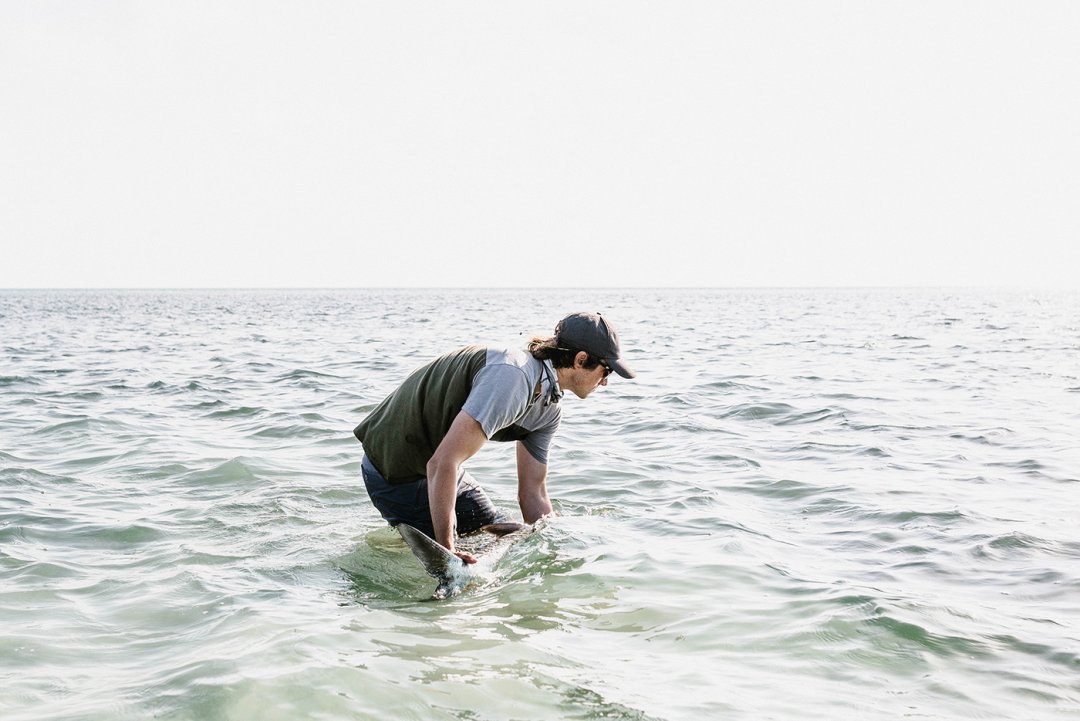 Luke cuts the boat’s engine as we approach two men standing knee deep in the flats, holding the tarpon upright to help it regain equilibrium. “He’s got good color and his eyes are clear, he just doesn’t want to swim,” calls out BTT Director of Science and Conservation, Dr. Aaron Adams, who’s gently handling the four-foot-long tarpon. Luke, Robbie, and Shannon trudge through the shark-infested water to inspect the fish. A couple stitches among the fish’s half dollar–sized scales reveal that Aaron has successfully managed to tag the tarpon. Luke takes Aaron’s place, ensuring water passes over the tarpon’s gills as he works up the strength to swim on his own. Relieved of his tarpon-reviving duties, Aaron takes off to catch and tag more fish.

“The tarpon life cycle is very mysterious,” explains Brooke Black, BTT’s Florida Keys Initiative Manager. Brooke liases between fishing guides and scientists to protect fisheries and habitats for tarpon, bonefish, and permit. Despite the fact that tarpons’ ancestors have been around since T. rex roamed the earth, little is known about their movements and habitat use, making it difficult to identify the root cause of their population decline.

Brooke can’t remember when she caught her first tarpon. She does remember the first big tarpon she reeled in at age seven (perspective: tarpon weigh anywhere between 40-150 pounds and are known for putting up a fight). She talks us through the idiosyncrasies of tarpon, bonefish, and permit as her husband Richard, a fishing guide, takes us through Islamorada’s flats on the family’s skiff. Every time Brooke sees mud, which indicates that fish have been digging for food, she skillfully casts her spin rod. It doesn’t take long for her to land a bonefish. She holds it next to the boat for a few moments to measure the sleek, silvery fish and clip its fin to collect a genetic sample. “It grows back like a fingernail,” she says as she unhooks the bonefish from her line. 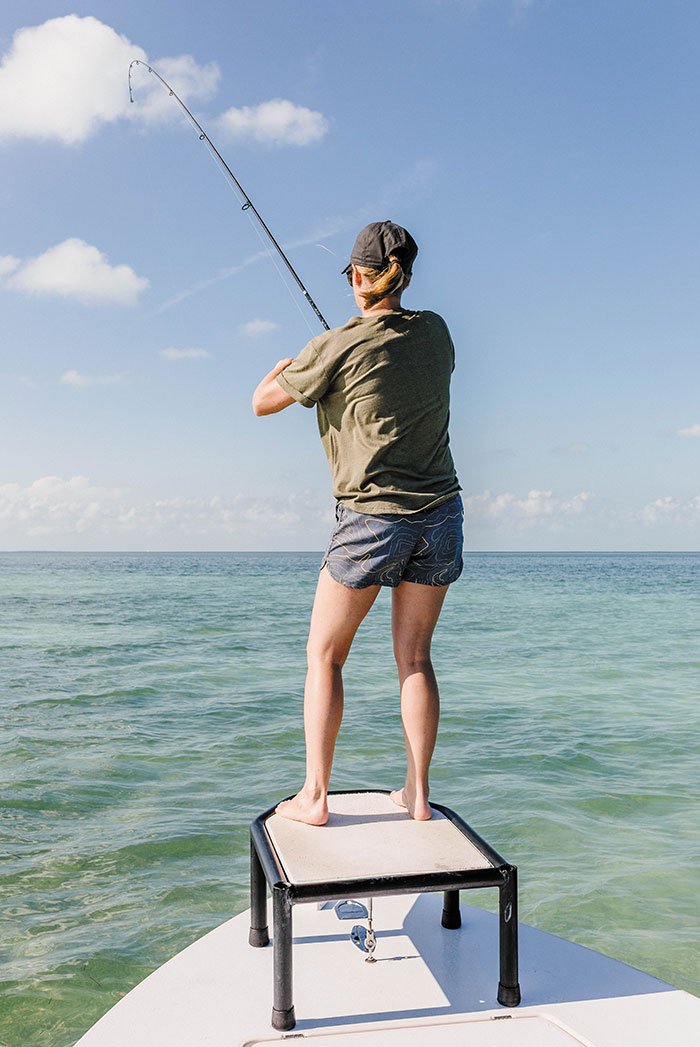 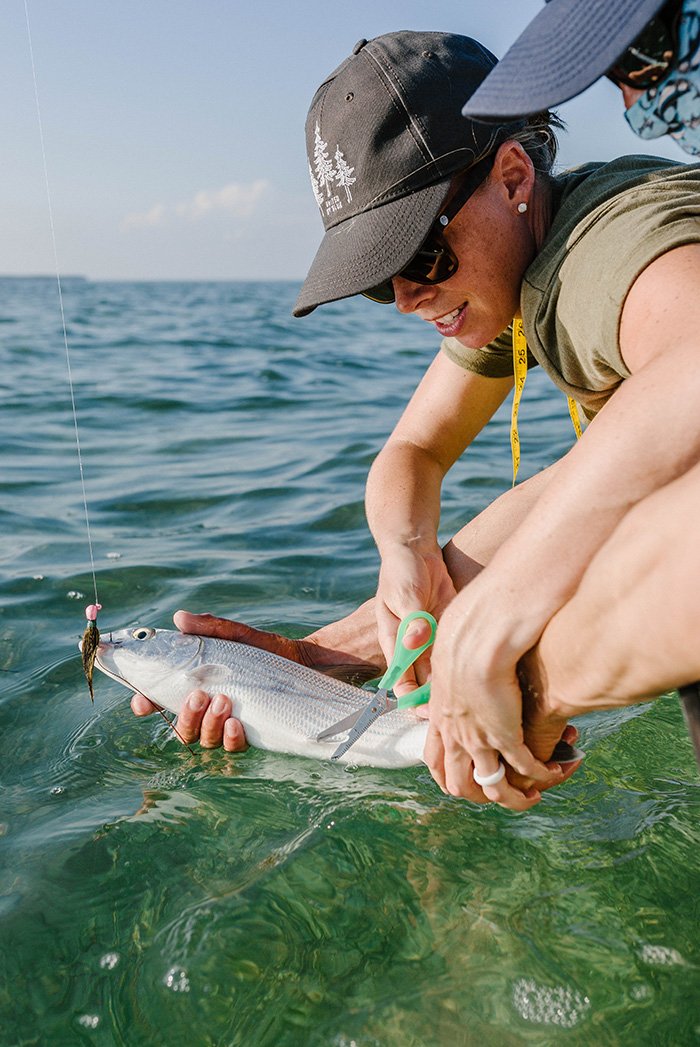 This careful collection of data has informed BTT’s policies regarding the decline of bonefish, tarpon, and permit populations, including working with the International Game and Fish Association to change tournament regulations so they’re more like Trippe’s. Their findings are the reason both bonefish and tarpon are now catch-and-release only in Florida. BTT is now focused on tagging and monitoring tarpon and permit: The more the trust knows about the flats’ keystone species, the more they can do to protect and enhance their habitats.

Since these game fish are difficult to catch — fishermen travel in droves to Key West for the challenge — collaborating with competitions helps the BTT collect more tags, faster. On another day on the water with Aaron Adams, we spend hours searching for “rolling,” or the sight of tarpons’ silver bellies flashing on the water’s surface. (Tarpon have a swim bladder that functions like a human lung, and they roll when they’re gulping for air.) Our guide, Bear, whose Disney-loving heart is as big as the burrito he ate for breakfast, decides to change things up. He cranks the volume on Adele’s “Hello” before tearing away to his favorite permit fishing spot. Within minutes, he’s got a permit on the line. 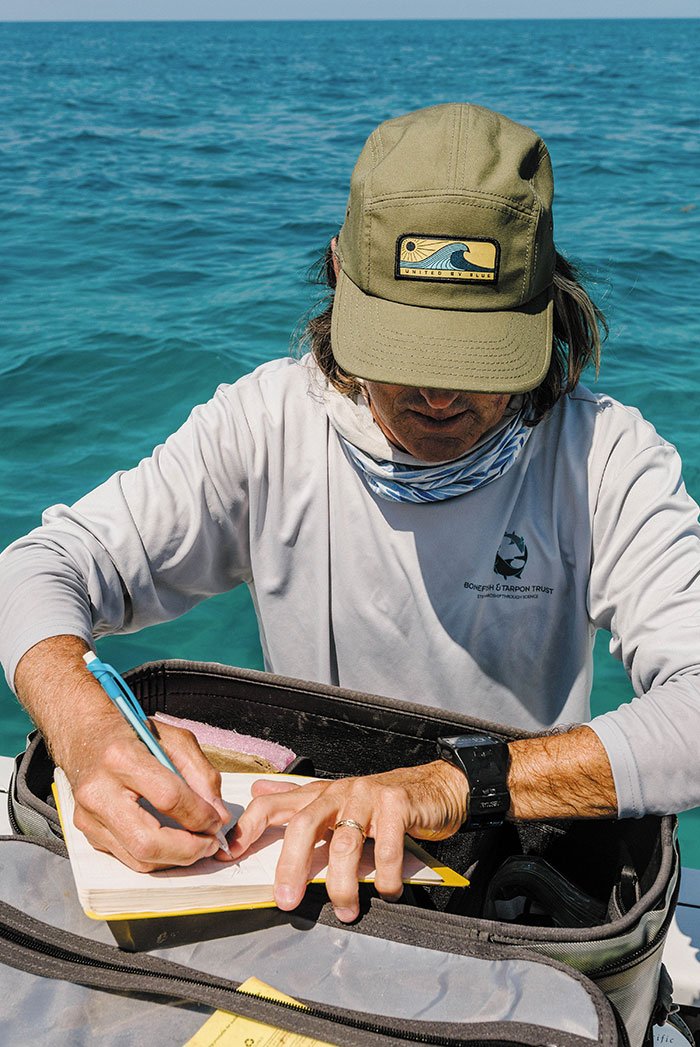 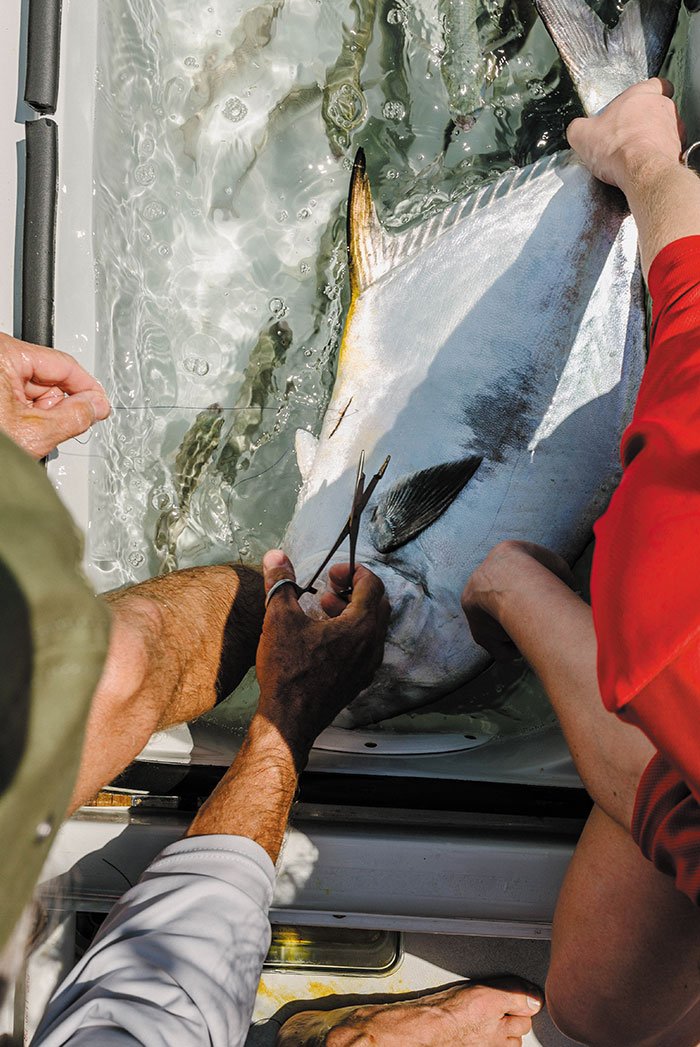 Aaron (who Bear solely refers to as “Doc”) is ready with a tag, suture, and disinfectant. The two swiftly transfer the permit into the boat’s live well (a small tank of water often used to store live bait), and Aaron removes the tag’s magnetic strip to activate the acoustic ping. The boat rocks as Aaron makes an incision on the permit’s belly, working as fast as he can so the fish can return to the ocean. He implants the tag, closes the cut with a suture, and then holds the fish upright so it can regain equilibrium. Once the permit has had enough time to rest, Aaron releases the fish back into the flats. The permit zips away from the boat, emitting ultrasonic pings as it cuts through the water.