We’re mere yards from I-90 when we see the first indications of wildlife, a deer print in the dirt trail. It’s still fresh, undisturbed by wind or foot traffic. The signs persist as we near Conservation Northwest’s wildlife monitoring site, just a half mile away from a six-lane freeway — tracks from a doe and her fawn, a bear’s claw and bite marks in a tree. The site is one of seven along a 15-mile stretch of interstate, which bisects Snoqualmie Pass in the Central Cascades. Conservation Northwest chose this space to confirm what they’ve learned from studying the land’s native species, analyzing roadkill reports, and consulting with state biologists: The coast-to-coast freeway is a crucial passageway for wildlife, too. "What’s easy for us to move on is easy for animals to move on,” explains Chase Gunnell, Conservation Northwest’s Director of Communications, as he unpacks his supplies. Chase and three of his coworkers, Laurel Baum, Alaina Kowitz, and Jason McCue, have led us down a regrown stretch of road to unearth which animals have moved through the area, some only hours before we arrived.

Jason stands in front of the camera with a sign to mark the date and time of our visit, moving the paper up and down to trigger a motion tracking sensor. The camera’s snapped 807 photos since it was last checked four weeks ago, and not just of Jason waving. The team rattles off examples of what’s been documented at this specific site: bobcats, wolves, black bears, even a man braving a brisk March in underwear and a cowboy hat. We settle around Chase’s laptop to review what wildlife (animal and otherwise) have been here since. 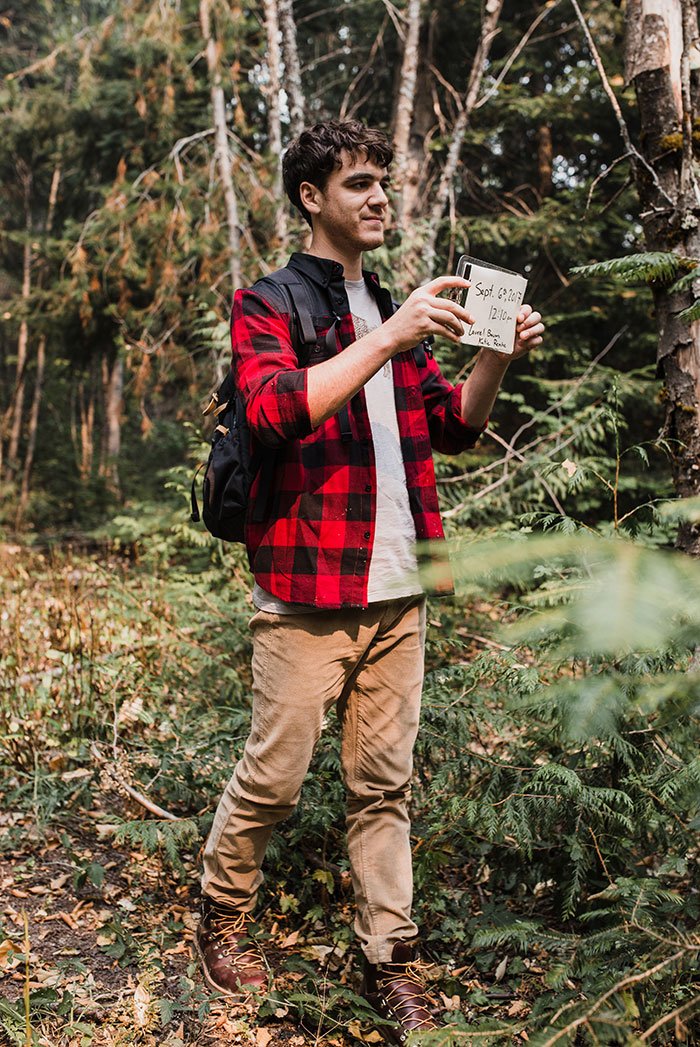 Between awws, oohs, and exclamations like “look at its diaper butt!” as a spotted deer crosses the screen, Chase details how wildlife footage can be used to influence land management decisions and keep habitats safe for animals to live in and migrate through. Bolstered by this field data, Conservation Northwest launched the I-90 Wildlife Crossing Project, which aims to reconnect the Cascades through wildlife crossings under (and soon, over) the interstate. These crossings secure a natural migration route for deer, coyotes, bull trout, and kokanee salmon, and the group is developing pathways for wolves and wolverines too.

Conservation Northwest relies on over 100 citizen-scientist volunteers to strategically place wildlife cameras, an effort led by Citizen Wildlife Monitoring Project Coordinator Laurel Baum. “It connects people who constantly drive down I-90 with what’s going on around them,” explains Laurel, who served as a volunteer for four years before joining the Conservation Northwest team full-time. The cameras allow Laurel’s colleagues to see what happens when they’re not on the trail, which informs the ideal placement and literal nature of wildlife crossings. As we drive through the Cascades, Laurel cheers as we go under one of two 150-foot-wide overpasses. Once construction is complete — and the bridge is vegetated to mimic the surrounding habitat — it will serve as the largest overcrossing in North America.

“Home ranges for these animals used to be so much larger,” Chase tells us as we continue up I-90 into the North Cascades. We’re en route to a wolverine monitoring site, which Conservation Northwest and state biologists set up to better understand this keystone species’ dwindling presence in Washington state. The team was tipped off about potential wolverines in the area when a hiker managed to spot one and snap a photo. Conservation Northwest has spent the last three years trying to document more on camera. 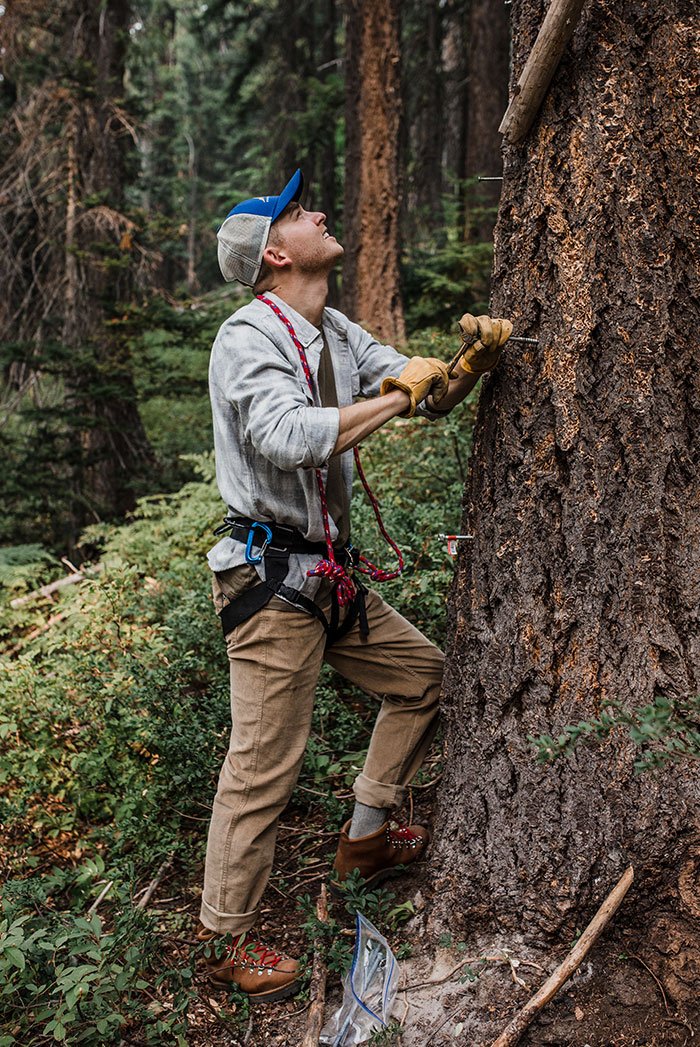 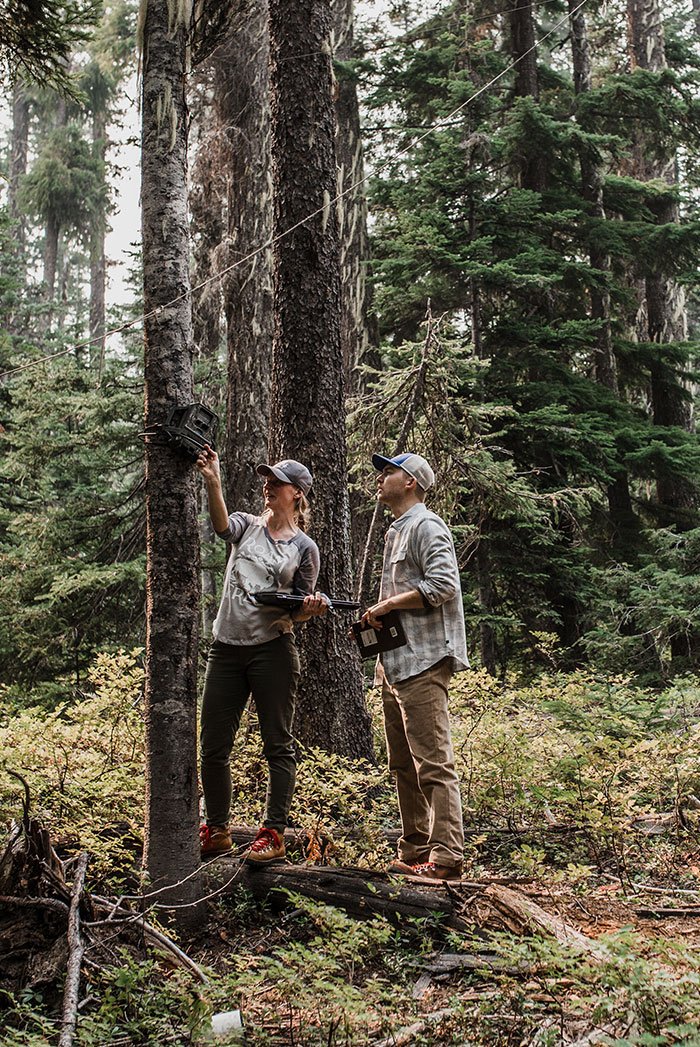 Chase guides us through dense woods, relying on memory and an occasional glance at his GPS to locate the first of two wolverine monitoring stations. Unlike the I-90 site, this location is specifically built to attract and document wolverines. A motion-triggered camera is positioned across from a run pole, a log structure built into a tree. The run pole’s design encourages a wolverine to pause for a photo and show his chest blaze, white markings in his fur akin to a fingerprint. While wolverines play a vital part in a healthy ecosystem, their current population in Washington state hovers between 30 to three dozen.

Three weeks ago, Chase rigged the site with a natural lure (a donated deer head), which is suspended mid-air to encourage the scavengers to scale the run pole. Chase also lined the run pole with hair snags, which procure a DNA sample as the mammal ascends and descends the tree. For good measure, he doused the area with gusto, a pungent, wolverine-attracting mixture of muskrat glands, fish oil, and garlic. But the site isn’t how he left it. The lure is gone; all that remains are clean, bleached bones. Chase suspects black bears, and the camera footage confirms it. Undeterred, Chase packs the camera, cleans the site, and moves on to the second monitoring station. He feels good about this one. The Conservation Northwest team has documented a wolverine here before — the only wolverine they’ve managed to photograph since the project began.

The second site is intact with 415 photos for Chase to review. He clicks through images of a bear cub licking gusto-drenched sticks and the occasional passing deer. No man in a cowboy hat. And no wolverine. Chase makes his way up the tree to take down his lure, analyzing how he can tweak his setup: maybe different lure, maybe an all-new site. For now, the monitoring station is out of commission until hunting season ends. He’ll return in the winter — likely on a snowmobile — to set it up again. Wolverines dig dens deep in the snow, traverse rocky terrain, and can cut through a femur bone with their teeth. But Chase isn’t scared or threatened by these animals. He’s eager for more to return to Washington state, which will help other wildlife populations survive and thrive. “The outdoors isn’t just our playground,” he says as we head home to Seattle. “We need to be respectful of these natural habitats and do better at coexisting.” Our car winds its way down bumpy back roads, which eventually lead us back to I-90. The smoke is clearing; we can finally see the mountains that sandwich the freeway. The wolverines that live there are still out of sight.